God gave each of us inherent worth and value; accept it in yourself, discover 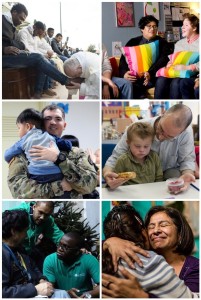 and encourage it in others, and peace may just be possible.  Archbishop Emeritus Desmond Tutu

Depending on who you talk to, 2017 is slated to be The Year of The Rooster or The Year of the Deal or The International Year of Sustainable Tourism for Development.

I’m hoping for something different.  A mentor recently recommended Dignity: The Essential Role It Plays in Dissolving Conflicts and it was the last book I read in 2016.

We live in undignified times.

We are about to inaugurate a President who was recorded saying words that would have gotten him expelled from most elementary schools. At least one Pulitzer Prize-winning fact check organization has had a field day with his statements.  And to make matters worse, at least half the nation seems to hate this man.

Donna Hicks (the author of Dignity) writes that “dignity” is not the same thing as “respect.”  All human beings are born with an inherent dignity and worth.  We don’t have to respect everybody though.  Respect is earned.

In the meantime, we must treat him with dignity as a child of the living God. This is not always as simple or as easy as it sounds.  I will need divine help.  The President-Elect’s words have already hurt people I love.  His threats have already made a tangible negative impact on their lives.

But today brings a new year. And as a new spiritual discipline, I’m going to try to make 2017 The Year of Dignity  – at least in my own head.  My hope is that it will change my heart.  And as a bonus, maybe it will also help me with bad drivers, rude people, cranky people, bullies and Duke fans.

The mosaic shows 2016 highlights of human dignity acknowledged by ordinary people – and the Pope.  Clockwise from top left  1)  Pope Francis washing the feet of Muslim, Orthodox, Hindu, and Copt refugees in Castelnuovo di Porto, Italy, 2) LGBTQ support group meeting in Charlotte, NC  3) a man helping a child with special needs in Glasgow  4)  an aftercare worker comforting a trafficking victim in Guatemala City, 5) Muslim and Christian volunteers feeding the homeless in London, 6) a U.S. soldier visiting orphans in South Korea.  Not only do we belong to God; we are all created in God’s image. Amazing.