Rest is a Form of Resistance 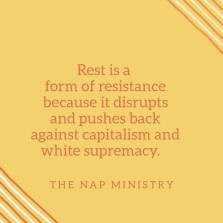 It’s been a long week, my friends.  Actually it’s been a long couple of weeks with big meetings and a two trips and a bad cold.  You don’t have to tell me twice to take a nap.

A colleague introduced me to The Nap Ministry which is – yes – about self-care and getting enough shut-eye.  And it’s also about much more.

Naps are a holy place, spiritual practice and a form of resistance for those living in the margins, navigating racism, poverty, violence and discrimination. What could have happened if we were allowed the space to rest?

The other night I was blessed to participate in a conversation about weathering and African American women.  This is a subject for a year’s worth of blog posts and I’ve been thinking about Women of Color who are in my life.

Life is remarkably easy for me.  I don’t have to prove that I’m worth being in the room these days mostly because of 1) my professional experience and 2) my age.  My skin color has allowed me in most rooms for most of my life.

Imagine a world in which we just stopped and rested because we could?  Most of us can indeed stop and rest.  We just don’t.

And there are millions of others who can’t stop and rest because of who they are and what they are going through.

Some of us have the power to allow others to stop and rest.  Let’s do that.  And let’s nap for the sake of our souls this weekend.  We get an extra hour of sleep.

This post is dedicated in memory of Erica Garner for All Saints Day.

One response to “Rest is a Form of Resistance”