I remember sitting with my mother as she was dying. For the purpose of self care, my Dad, siblings and I took turns being with her.  We believed that whoever happened to be there when she died was supposed to be there but none of us were going to be heroes camping out 24/7 for as long as it would take.

It was comforting to hold her hand and whisper comforting words, but it was also soul-wracking.  When someone is in terrible pain and there’s nothing you can do, it takes it’s toll on the witnesses.  And knowing that more morphine would eventually stop her breathing was also excruciating.

When I would leave my shift and take a break, it was almost offensive to hear people joking around in the hospital elevator.  Didn’t they know I was grieving?  Didn’t they see from the look on my face that I was not okay?

I thought of this yesterday when two African American sisters shared their experiences as People of Color who are dealing – not only with the pandemic – but also with the general realities of Living While Black.  They were well aware that George Floyd could have been their son or brother or nephew.  They could effortlessly imagine Breonna Taylor being their daughter or sister.  The daily trauma of being Black in this country is nothing new.  But add it to the pandemic anxieties and the political news (including confirmation that the President of the United States cannot condemn white supremacy) it feels like a particularly brutal time.

Emotions are raw, and yet privileged White neighbors and colleagues are often going about our business joking around as if the world is okay.  It’s not okay.  The world isn’t okay.  And our Friends of Color are not okay.  When we encounter our Black and Brown neighbors, are we cognizant of what they are going through?

On the other hand, many of us with White skin are not personnally impacted by COVID-19 or 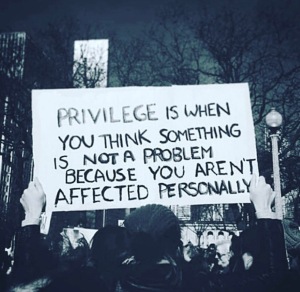 police brutality or daily microaggressions.  And so they don’t exist for us.  We have nothing to worry about.  Those issues belong to somebody else.

This is the definition of White Privilege.

But we can do something for those who are affected personally.  We can notice.  We can see them. We can be respective of their grief and rawness.

I’m not saying don’t be happy.  I’m not saying there is nothing hopeful or funny or beautiful out there.  I’m just saying that even on a gorgeous day, Breonna’s killer is still not being held accountable and at any moment another innocent Black person could be assaulted by the police.

Let’s hold that thought as we go through this lovely Thursday God has given to us.

Top image is a photograph of raw nerves by Gary Holmes.  The bottom image has been widely used over the summer in light of the protests about the killing of unarmed Black Americans.