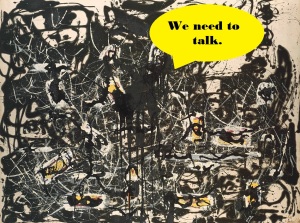 When David Letterman had a daytime talk show long ago, he did a bit involving Difficult Conversations.  He would ask if anybody in the audience was dreading a personal conversation,  and then he would make a phone call on their behalf.  He called unsuspecting boyfriends and broke up with them at studio guests’ requests.  He called parents and told them that their kids had wrecked the family car.  You get the idea.

Very few of us enjoy having difficult conversations, most especially within a spiritual community.

What conversations have you initiated and/or endured that are forever memorable because of the sheer suckiness of the situation?  Here are my top three in no particular order:

But, my friends, the pot longs to be stirred.

After years of making myself have difficult conversations with parishioners, family members, friends, and colleagues, I’ve found that – done in love – I really appreciate these conversations.  They clear the air, clarify realities, and serve to improve processes and procedures.

We in the church are generally terrible with this kind of thing.  Most of us would rather poke our eyes with a pencil rather than initiate difficult conversations with parishioners who are causing mayhem, leaders who have broken confidentiality, church ladies who gossip, and staff members who need to be fired.  We endure ineffective leadership, toxic relationships and confusion rather than grapple together in healthy dialogue.

Pastors go for years without an annual performance review because personnel leaders have no idea how to tell their pastor that ____ needs to improve or maybe it’s time to retire.  Inept staffers keep their jobs solely because nobody has the guts (or the compassion) to discuss the need for a change.

But if we respect people, if we take community seriously, if we see to reflect God’s reign on earth (as it is in heaven) we will learn how to address difficult situations.  Honestly, it’s not so hard once we learn how to do it.

Image is Yellow Islands by Pollock (1952) with a slight edit.