Many of us with PCUSA –  and especially Washington, DC  – ties have shared this 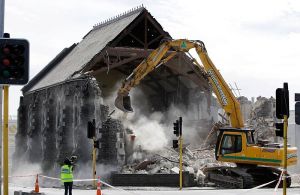 The title of this article creates some confusion because:

It’s not that I don’t believe that churches can be demolished.  It’s just that I believe that machines do not demolish churches; people do.

It’s a common mistake.  The image above is from the demolition of the Sydenham Heritage Church building near Christchurch, New Zealand, but the article describing this event calls it the “church demolition.”  Again, the church was not demolished.  The building was demolished.

A church is not a building.  (This notion might take a lifetime to correct.)

Cranes, excavators, and bulldozers demolish buildings.  Human beings demolish churches – and if you are interested, this is how we do it:

What’s actually true is that a church has been choosing to close for many years now.

I understand when the secular press gets it wrong and believes that a bulldozer can demolish a church.  But it’s less understandable – or acceptable – when we human beings demolish our churches.

Note:  This post is dedicated to Arlington Presbyterian Church that used to worship on Columbia Pike in Arlington, VA.  They will worship there again in the future.