I love the Brief but Spectacular segments on the PBS Newshour.  Last night’s segment with attorney Bryan Stevenson was perfect for Good Friday. Please watch it here.  It’s less than 3 and a half minutes long.

On Good Friday we remember that a man named Jesus of Nazareth  – whom many of us call Savior – was humiliated, tortured and executed.  Crucifixion was meant to be both a means of execution and a deterent so that others would take heed.  It’s what happened when someone challenged the empire. 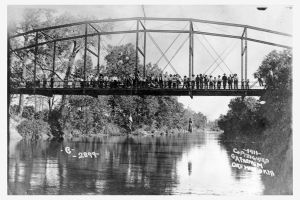 It looked something like the lynchings in this country in the 19th and 20th Centuries when men and women of color were killed by angry mobs, often being tortured before or as they died.

Every single one of us who calls ourselves Christian has a duty to know about the history of lynchings in our own country.  If you were moved by the violence of Jesus’ death in The Passion of the Christ by Mel Gibson, then you’ll get an idea of what ordinary and extraordinary human beings endured in our own local Golgothas.

I would like to believe that lynchings are a thing of the past – whether people are hanged from crosses or trees or bridges.  But I believe that we continue to humiliate, torture and execute innocent people today.  We don’t like to talk about it, but it happens every day in our great nation. Sometimes it happens at the hand of those hired to defend and protect the innocent.  Sometimes it happens by bullies and bigots. But it still happens.

Jesus died much like Ed Johnson (1906 in Chattanooga) or Mary Turner (1918 in Lowndes County, GA) or  Elias Clayton, Elmer Jackson, and Isaac McGhie (1920 in Duluth, MN.)  He was an innocent man who was killed because of the sins of the world.

The message of Easter is that love wins even in a world of hate.  And our role as followers of Jesus is to love as he loved and to work against the kind of evil that killed him.

Image of the lynching of Laura and L.D. Nelson on a railroad bridge in 1911 in Oklahoma.

2 responses to “A First Century Lynching”