I was about thirteen years old in my happy place:  the Public Library on the 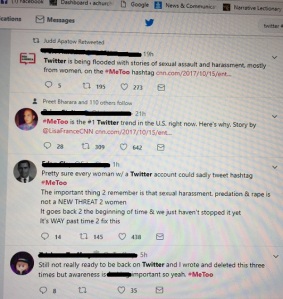 corner of Franklin and Boundary Streets in Chapel Hill.  It was summertime. I was looking over the biographies, bending down to see the books on the next-to-the-bottom shelf, when I felt a hand coming from behind me, reaching up into my shorts.  I jumped and turned around to see a boy I recognized from Junior High – a year or two younger than me – with a really creepy smile.  Really creepy.

I’ve shared before the story of a friend who was among the earliest generation of clergywomen, who – for decades – was the only woman at clergy meetings.  She told me that for the first twenty years of ordained ministry, there was never a meeting with clergymen when at least one of them didn’t say or do something inappropriate.  One of them actually said to her, after she rebuffed him: “If you’re here, we can have you.”  It was the price for being in a male profession.  It was the price for daring to believe she too could be a pastor.  They were married and single, older and younger.  It was never every clergyman.  But it was always one of them.

Maybe there are women out there who’ve avoided being grabbed or ogled or catcalled or pinned against the wall by a man without her consent, but I don’t know any.  The men who assault women are friends and strangers.  Assaults happen in homes, dorm rooms, and friend’s houses, in trains, buses, and cars, in offices, classrooms, and church buildings.

The good thing about #MeToo trending is that it reminds us that we need to make our culture safe enough for a young girl who was grabbed in the library to tell someone.

And we need to teach what consent means, maybe even in Church classes.