Embracing Our Inner (or Outer) Loser

It was New Year’s Eve, 1977; she and Donald Trump were together in the hospital room after their first child had been born, discussing the matter of what name to give their new infant. Ivana suggested that the son should be named after the father: Donald Trump Jr. Donald, however, balked at this.

Steve Taylor wrote the song Jesus Is For Losers and I agree.  Actually, #@!*-ups of the World Unite offers the same sentiment and it’s a better song.

Jesus is for the losers, the liars, the crooked, the hated, the weak, the lost, the ridiculous, and the condemned.  Jesus’ point was to bring justice and healing and love to the world’s losers.

Our culture increasingly equates financial success with everything from goodness to intellect – which is obviously a false equation.  Nevertheless, many  believe that the poor are bad or lazy, when actually, most poor people are trapped.  They are poor because liberty and justice is not actually for all. 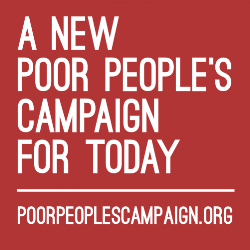 (and you can check out dates for future Mass Meetings here)

We heard brief stories from:

Some people would call them losers.  Some would call all of us who gathered in Stone Temple Missionary Baptist Church losers.  But there are many things worse than being tagged a “loser.”

Years ago on The Apprentice, Mr. Trump said this to a contestant named Alex:

“I’ve always said, if you hang out with losers, you become a loser.”

Embracing our inner (or outer) Loser is what Jesus was all about though.

What if he’s a loser?  What if she’s a loser?  It might actually be what saves his or her life.  And maybe it’s what moves us to walk alongside others who deserve a win.