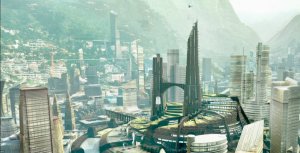 Everyone should have a Wakanda.  But it’s not like that.

Wakanda is the fictional nation ruled by King T’Challa who is also The Black Panther.  Although most of the world knows Wakanda to be a poor country of farmers, the truth is that Wakanda is the world’s only source of vibranium.  And vibranium is . . . well, go watch the movie.

Along with being a technologically superior nation, Wakanda enjoys a long and revered tradition of honor and peace.  They have never been colonized.  Their resources have never been taken from them.

Everyone should have a Wakanda.  But it’s not like that.

This is what I heard the brilliant Jenn Jackson say on Sunday night at a showing of Stay Woke, a documentary about the Black Lives Matter movement by Laurens Grant.  Laurens also happens to be brilliant.

Imagine a world where people live in honor and peace, where those who farm and build and create enjoy the fruits of their labors without fear of oppression or plunder or colonization.  Interestingly enough, the prophet Isaiah wrote that God wants this for us too:

Jenn Jackson shared a human truth as she referred to The Black Panther movie in her talk Sunday night:

“If your Wakanda means that people who look like Jenn Jackson will be enslaved, then it’s obviously not Wakanda for everyone. My Wakanda cannot be one that oppresses anyone.”

As we grapple in the United States with issues about everything from settling refugees to protecting DACA people to selling assault rifles to offering health care to the poor to expanding mental health care – we are actually talking about what our Wakanda looks like.

Although we do not have unlimited resources in the United States, we are rich.  We. Are. Rich.  And yet our riches are hoarded by an elite few whose Wakanda involves something different than the one I’ve described.  We have the capacity in the United States to feed every child, offer health care to every citizen, and end school shootings.  But those with power choose not to do those things.

As children are shot in their classrooms or white supremacists march in Charlottesville or unarmed Black men are shot for violations that White men would get a pass for, we sometimes hear that “This is not who we are as Americans.”  But the heartbreaking truth is that – actually – this is exactly who we are.

We are a country with gun laws that make it easier for unspeakably disturbed people to shoot people in schools.  We are a country where white supremacists march with torches and yell Nazi slogans.  We are a country where we turn away people even if they are running for their lives or grew up here with parents who were desperate enough to flee their home nations.  Dear God, we are a country that once kidnapped and enslaved human beings only to free them to a system of sickening laws that has led us to an obvious school to prison pipeline that incarcerates so many people of color that “it has warped our sense of reality.”

This is who we are.  But we don’t have to be this way.  We could be more like Wakanda.

Everybody should have a Wakanda.  We are the ones who could make it more like that.

Image of Wakanda from The Black Panther.