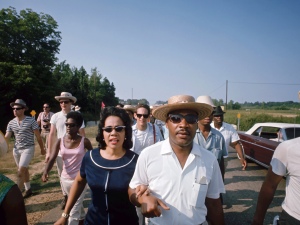 On April 4, 1968, I was doing my homework at our dining room table.  My mother was sitting on the sofa reading but the television was on and it was announced that Dr. Martin Luther King Jr had been killed in Memphis at the Lorraine Motel.

Me:  What’s going to happen now?

Decades later when my sons were about the same age as I was on the day Dr. King was murdered, I took them to Ebenezer Baptist Church in Atlanta where – during the Passing of the Peace, my boys shook hands with Mrs. King and Dr. King’s sister.  It was one of those moments in their lives when I held them firmly by the shoulders, made them look me in the eye and said , “Boys, I need you to remember this moment for the rest of your lives.  You have just been in the presence of history.”

In between these two memories is another one.

I don’t want to drop names here, so I won’t. But I was in a well-known theologian’s home with a group of friends in the 1980s when the phone rang and I was asked to answer it.  The person calling identified herself as Coretta King.

Me:  Seriously?  (I was in no way a cool, unflappable twenty-something.)

They spoke and what I remember most was that when he returned to us, he referred to her as “a b@#*^.”   I was shocked at his language, but today, I’m more shocked (and yet not shocked) at his characterization of her – most likely because she was a strong woman and a scholar/activist in her own right.  Women with opinions – and maybe especially women of color – are still called names when we are not docile enough or polite enough.

The day after his murder, Mrs. King continued the march with sanitation workers in Memphis.  The. Day. After. Her. Husband. Was. Killed.

Coretta Scott King is a model for us all.  Everybody remembers that it’s been 50 years since Dr. King was murdered.  Some are noting that we haven’t come very far in terms of economic justice for the poorest among us.  But only a few are continuing in the movement to bring justice and moral renewal to this great nation.

The Kings are not merely historic figures.  They continue to inspire us to keep moving forward in the cause of liberty and justice for all people.

Image source –  from 1966 on a rural road in Mississippi.  And please join the Poor People’s Campaign: A National Call for Moral Renewal here.