Racial Purity (is not a thing)

Many folks are excited that the United Kingdom will have a biracial princess later this week, but she won’t be the first one.

My new city – Charlotte – is named for Queen Charlotte the wife of King George III (Remember from Hamilton?) who was previously Princess Charlotte of Mecklenburg-Strelitz.  She married George six hours after meeting him at the age of 17, and she was personal friends with Johann Christian Bach and Marie Antoinette. And she founded a variety of orphanages and hospitals.

And she was of African descent.

Queen Caroline was a descendant of Alfonso III and Ouruana, a black Moor.  The artist Allan Ramsay who knew the Queen depicted her 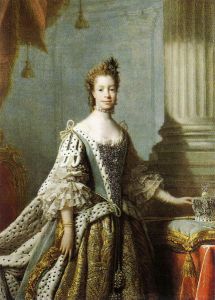 So there’s that.  Next time I hear someone described as “whiter than the Queen” I’ll be thinking “not so much.”

We human beings are all connected if we go back far enough.  Remember that race is a social construct invented to separate people. “Whiteness” and “Blackness” are not fixed.

So, while it’s interesting to say that Ms. Markle will bring “racial diversity” to the royal family, it was already there, and it’s part of our heritage too.  This is our story.  It includes love and violence and division and ties that bind.

To quote historian Nell Painter: “Race is an idea, not a fact.” And from Ta-Nehisi Coates:  “Race does not need biology. Race only requires some good guys with big guns looking for a reason.”

For all those with big guns (or microphones) out there: “racial purity” is not a thing.

Top image is the official engagement photograph of Prince Harry and his betrothed Meghan Markle.  The lower image is Queen Charlotte (1744-1818) painted by William Ramsay in 1762.  It hangs in the National Portrait Gallery, London.