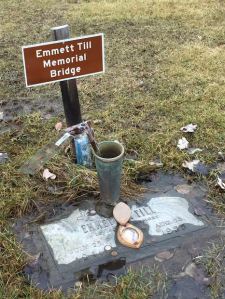 Sometimes God’s grace is infuriating though.

I believe God’s grace is for Carolyn Bryant Donham too  – even after lying about her interaction with Emmett Till in Money, Mississippi over 60 years ago. He was 14 years old and black.  She was 21 and white.  She told authorities that young Emmett from Chicago – visiting cousins in Mississippi  – had flirted with her and then assaulted her in the store where she worked.

“According to recovered court transcripts released by the F.B.I. in 2007, he let out a “wolf whistle” as she exited the store to get a gun from her car. Bryant later informed her husband and his half brother, who proceeded to uphold a grim tradition: Till was abducted, beaten, shot in the head and thrown into the Tallahatchie River.  A 74-pound gin fan was tied to his neck with barbed wire, with the hope that he would never be found.”  (Source)

In an interview by Timothy Tyson for his 2017 book The Blood of Emmett Till, Carolyn Bryant Donham confessed she had lied.  It was all a lie. And her lie got Emmett Till lynched.

No. Carolyn Bryant Dunham doesn’t deserve forgiveness. She deserves to be punished.  And yet . . .

Last Sunday I stopped for coffee in a rural area on my way to church and was impressed with the cute coffee shop that roasted its own beans and baked its own scones.  It was very crowded for a Sunday morning.  There were sofas and booths for two.  And there was a large table with about 20 people sitting and standing around it.  I took a seat on one of the sofas to sip my coffee and look over my sermon when I overheard a man at the large table complain about “liberals.”

“Someone ought to line ’em all up and then string ’em all up,” he said.  And others at the table laughed and agreed.  I admit before you and God that I literally thanked God at that moment for my white skin.  But I said nothing.

If you remember the parable of The Good Samaritan, I was more like the hypocritical priest headed to worship than the Good Samaritan who stopped to do the right thing without regard for his personal schedule.  Frankly, I was afraid.  There were 20 of them and one of me.  Even with my white skin in an establishment full of other white people, I was afraid.

My guess is that Carolyn Bryant Donham was afraid in 1955.  Her husband and brother in law were violent men and maybe they intimidated her to say things she didn’t want to say.  Or maybe she told a small lie that erupted into a huge lie.

Nevertheless, her lie killed a child.  And she doesn’t deserve grace. But God offers it anyway.

All of us have fallen short of God’s glory.  Every one of us.  And yet the God I believe in offers us grace anyway.

It’s maddening.  This means I have to forgive people too – which I rarely want to do.  I like to simmer in my own resentment and anger  – which of course does nothing but kill my soul.

There are no words to express my anger at the Carolyn Bryant Donhams of the world.  But while I’m boiling inside about what that woman did and then what she failed to do, the truth is that I am also in need of forgiveness and so are you.

The astounding thing is that God forgives us even when we cannot forgive ourselves.  But I confess, I have some wrestling to do with God.

Image of Emmett Till’s grave in Alsip, Illinois about ten miles from my and HH’s house in Flossmoor.