I’ve been gone for two weeks:  one for vacation and one for study leave – although 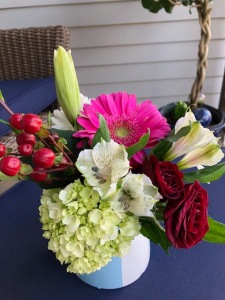 HH and I were leaders at that Continuing Education event.  Also we lost a car and a phone but that’s for another post.

I learned at the Clergy Couples Conference at Massanetta from financial advisor Brad Barnett that:

Of the Big Three expenses that human beings have in this country, the average breakdown of one’s income goes like this:

Some of those things I’d call mental health expenses.  And I’m not just talking about what we pay the therapist.

Almost everybody – regardless of income level – spends money on items that bring us calm/sanity.  For some, it’s individual cigarettes. For others it’s weekly pedicures.  For a blessed few it’s an annual vacation to a sunny venue with tropical adult beverages.

[Note:  There’s a fine line between self-destructive behavior and self-care behavior.  One person’s Friday glass of wine is another person’s weekend binge.]

But what if eating out and/or buying coffee in a comforting cafe offers a slice of mental respite?  I have a sun roof in my car expressly because it feels like a little vacation every time I take the wheel.  And I consider an occasional bouquet of flowers to be good for my soul.

People with financial discipline are to be admired and emulated.  No dinners out = vacation money.  I get it and good for you if you don’t even drink coffee.  But there is deep joy and nourishment in using a little money for something that we can savor in a moment of peace whether it’s expensive cheese or a foot massage.

Clearly, this is not a post for those with absolutely no financial wiggle room.  College debts and lifelong poverty – among other things – makes much of this a fantasy.  Many clergy couples I know have both seminary debts and children, and their incomes hover just above the poverty line.  Most first call pastors make “the minimum” established by their Mid-Councils.  Or they earn less because they are “part-time” which is church talk for Full Time Ministry on the Cheap.

Talking about money is not my favorite thing.  HH and I returned home and looked over our own expenses and we can do better.  Not $360-a-month-for-food better, but better.

I learned so many things while away over the past two weeks.  One was that my soul needs flowers and an occasional cup of coffee out with friends.  What are you learning this summer?