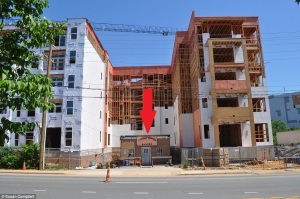 than six months and I don’t have much stake in the changes except to say that I like being able to walk to the grocery store and assorted restaurants.  I’m told that my apartment was built on the site of an unused warehouse  and so I don’t have Gentrification Guilt.  Nobody had to move when my apartment building was constructed.

And then we have The Thirsty Beaver.

It’s been described to me as “A Middle Finger to Gentrification” and that seems to be true.  If you look at the image, you notice that new construction had to be erected around this little bar.  I haven’t been inside yet because 1) I’m probably not cool enough and 2) it would probably be frowned upon for me to be seen in this establishment.  (Note:  I am game to visit for anthropological reasons if you happen to be in Charlotte and  want to join me there.  For anthropological reasons.)

Bars are excellent evangelism venues and just last night, as I was doing my post-exercise “cool down” I met C and K from Mississippi and then I met J and J from eastern NC at a different establishment where neighbors gather.  I feel blessed to live in a neighborhood where few people are “from here” and so introductions are easy and dogs are especially welcomed.

What would we do to hang on to community?  The owners of The Thirsty Beaver turned down serious cash to keep their gathering place which meant that the new construction had to go around them.  Sometimes new construction enhances community.  It’s not an either/or.  It’s a both/and.

How does your church, your non-profit, or your for-profit build community?  People are craving authentic connections, and I’m grateful to those who resist the temptation to give up authentic community gathering spaces for money.  BUT – before you assume I am always in favor of keeping old structures for the sake of sentimentality and history, let’s ask ourselves:

If not, maybe something new could do a better job.  In the meantime, who wants to check out The Thirsty Beaver with me to study what happens there?