That Time I Slept in a Plantation House 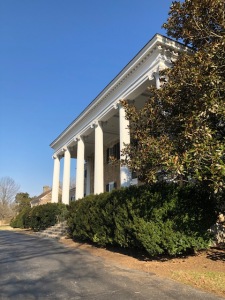 Bunny Mellon was lovely from what I understand.  She was a horticulturist known in many circles because of Listerine Mouthwash, Gillette Razors, the White House Rose Garden, and horses.

As a young woman, her family lived  in a former plantation home. I got to sleep in her bedroom once – in the same room where she gave birth to her oldest child.  There was a painting by Winston Churchill on the wall.

The fact that all of this is true speaks to the stark fact that I am a person of enormous privilege.

I did not grow up with wealth or fame or parents who were known for anything other than being kind and loving.  My father told me that the day they found out that they were expecting me, they literally had five cents to their names.

But even if I have never been wealthy, even if my parents worked hard for their middle class life, even if we drove used cars and lived in a medium sized house that needed a lot of work – I grew up remarkably privileged because my skin is “white.”

I didn’t grow up with original paintings on the wall, much less paintings by British prime ministers.  I certainly didn’t grow up with a boxwood maze in the back yard or panoramic porch views.  And yet it’s also true that I wasn’t followed around while shopping by clerks concerned that I might steal something.  I could easily hail a cab.  I could eat in any restaurant in town.  People assumed I belonged everywhere I went – from swimming pools to fancy dress shops to ivy-covered universities.  I was judged to be acceptable and safe because of the melanin levels in my epidermis.

Those of us who do not believe that having white skin = privilege need to talk with our brown and black neighbors who deal with implicit racial bias every day. When I’m with a friend with dark skin, it’s often assumed that we couldn’t possibly be together.  I’ve been with black and brown friends who have been questioned about being in certain spaces while I’m welcomed warmly.  I was not even questioned about living – for a brief time – like Bunny Mellon in a former plantation home.

We don’t have to be like Bunny Mellon – or in Bunny Mellon’s home – to experience great privilege.  Our privilege happens every day if we have her same skin tone.

One response to “That Time I Slept in a Plantation House”