Some of my best friends are lawyers. 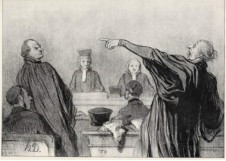 Some (many?) people do not trust lawyers. And yet, I once served a congregation comprised of many folks with law degrees and they were – for the record – stellar human beings.  They cared about justice and integrity and social righteousness.  For that matter, I serve a denomination strongly influenced by a lawyer.

We live in a litigious society but we don’t have to.  As I write this, I’m surrounded by denominational leaders doing God’s work who are aware that we could (and sometimes are) concerned about legal issues.  Someone wise pointed out that people in the church don’t pick up their church constitutions until they want to stop something legally.  We use our constitutions as a weapon or a shield instead of a permission-giving faith document.

What if we – instead – lived each day more focused on what we can do in obedience to God’s calling instead of what we can’t do for fear we will find ourselves in a legal entanglement?

I admit that I personally need to be reminded occasionally that our denominational function is beyond church law or institutional support.

But we have got to realign who we are in the realm of our Creator.  We exist to serve God’s purposes.  We do not exist to avoid legal issues.  Let’s be brave.  Let’s be forgiving.  Let’s remember that we are trying to follow One who was arrested for sedition but who was actually serving God perfectly.

Image is A Criminal Case by Daumier