My Father Was a Hugger 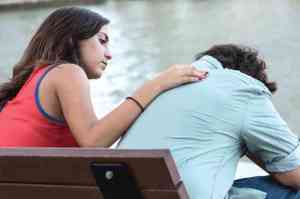 My Dad was in no way a lasciviously grabby man.  He was warm and quick to warm my cold hands or offer a hug.  He was particularly respectful of Women of a Certain Age, especially after his own mother died.  He would hug some of the older widows in church telling me later, “It’s probably the only time they will receive a human touch” this week.  By no means did he stand in line and hug everybody.  His affections were limited to people he knew well.  But he knew the value of wholesome human touch.

Things are different now.  Al Franken self-identifies as a warm person too.

I can imagine having a conversation with my Dad – if he were still alive –  informing him that not everybody likes/wants to be hugged.  Even if he asked first, I can imagine him asking “Can I give you a hug?” while moving in for the hug before someone can respond.

Remembering Dad and the importance of human touch, I became a hugging pastor.   I would often hug people as they left the sanctuary on Sunday mornings, especially cognizant of those who might need comfort.  I was their pastor and I often knew when they were going through difficult times.

To be honest, there was at least one person who asked for hugs and it felt icky.  A basic sideways-ish hug is not about sexual power.  It’s about restorative human connection.  But it can be abused.

Have we reached a point when we need to stop hugging each other unless we know for sure that someone wants to be hugged?  “May I hug you?” can feel like a cursory question (asking while zeroing in on that hug.)  We might assume that “everybody likes to be touched warmly.”  (Not true.)

My Dad also talked with strangers in the grocery store and made comments to random children in public places.  He would have needed some coaching on navigating 21st Century conventions.

It goes without saying that we do not pinch people’s rear ends.  Really.  This is not okay in any circumstance unless you and your beloved have some kind of arrangement and you both think it’s funny/affectionate.

Especially while taking photographs (remember this?) it’s not okay.  Women are taught not to make a scene, especially when a camera lens is pointing our way.

But human touch – an elbow, a shoulder – still seems necessary.  HH’s church ends each worship gathering with facing the center aisle and touching the shoulder of the person beside or behind you during the benediction.  I love this.  As my Dad might say, “This could be the only time people experience human touch that week.”

Image of “safe hand to shoulder zone” from here.

4 responses to “My Father Was a Hugger”