Quick stats about clergy in my denomination and beyond: 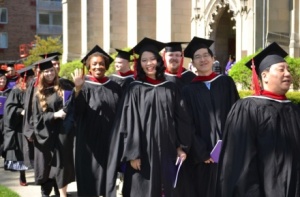 I know fewer pastors who admit to climbing the ecclesiastical ladder these days although it probably still happens.  I have one clergy friend who has intentionally served successively smaller and smaller congregations because he was following the Spirit’s nudging.  He is a great leader and he has the financial security to be able to seek smaller and smaller church positions which pay less and less.

And then there are other pastors whose choices are limited and climbing the ladder is not an option.  For example:

And many 60-something (and often 70-something) pastors are delaying retirement.

Yesterday I wrote a post about resentment that happens when “undeserving people cut in line” in terms of job opportunities.  The same thing happens in churches.

As Baby Boomers are (finally) retiring, I hear congregations say they are looking for Millennial pastors – completely bypassing those in the generation between the two.

I know many qualified white straight male pastors who have stood in line for the opportunity to be called to their dream church only to find that the Pastor Nominating Committee is hoping to call a white female or a Person of Color. “It’s hard to be a white male pastor,” one clergy person said to me recently.  Actually, it’s not that hard.  It’s just that being a straight white male is not enough anymore.

My practice is to ask Pastor Nominating Committees to stop thinking “check list” when seeking a new leader.  Stop looking for a person of a specific generation, a specific gender, a specific skin-color, a specific number of years as a “head of staff,” a specific marital status, etc. etc. and discern a real person with an authentic call whom God has gifted for your congregation’s particular needs and hopes.  You might be surprised whom God is lifting up.

In spite of comments that “some people are cutting in line” in Church World,  I know too many women, too many LGBTQ leaders, too many People of Color who have graciously stood in line, waiting their turn to be noticed –  much less called to serve – for long years.

Those of us who have been fortunate enough to be called to something akin to our dream jobs have the responsibility to open doors for those still standing in line.  If possible, we need to make the way clear for our colleagues who seek their dream jobs too.  Especially for those of us who will be retiring sooner than later, we owe it to the generations after us to encourage congregations to seek the pastor with the right gifts rather than the pastor who seems to have the right look.  #NoMorePulpitCandy