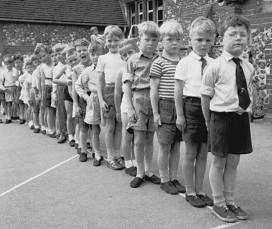 To be the “Line Leader” in elementary school was a big deal for our kids. It gave them what felt like absolute power to – keep their classmates in line – literally. The pride on their faces while leading their friends to the library or to the gym was obvious.  If you were lucky, you got to be Line Leader for the whole week.

And because nobody has a sense of justice like a second or third grader, no one dared to cut in line on their watch.

When adults cut in line, the result could be a shrug or a punch, depending on the context.  There are some very angry people in the DMV line.  Not so much to board a Southwest flight unless you think you can jump into the A line with your sad C boarding pass. 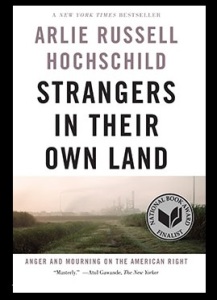 ramifications for our nation. (Thanks TW.)

Cutting in line – in terms of life opportunities – results in deep anger and mourning – especially for the American Right.  Hochschild – a San Francisco sociologist – spent five years in the Louisiana bayou befriending  “arch-conservative” residents, and she found that one person’s social movement to bring equality to minorities and women is another person’s experience of having “other people” cut in line.  Especially during the 1960s and 1970s a number of cultural shifts “shuffled the order.”

“During this era a long of parade of the underprivileged came forward to talk of their mistreatment – blacks who has fled a Jim Crow South, underpaid Latino field workers, Japanese internment camp victims, ill-treated Native Americans, immigrants from all over.  Then came the women’s movement.  Then gays and lesbians spoke out against their oppression.  Environmentalists argued the cause of forest animals without forests.  The endangered brown pelican, flapping its long, oily wings, had now taken its place in line.”

Our nation was created for white straight males.  But things are increasingly different now.  In the words of Arlie Russell Hochschild:

“All these social movements left one group standing in line: the older, white male, especially if such a man worked in a field that didn’t particularly help the planet.  He was – or was soon becoming – a minority too.”

It will be a while before white straight males indeed become a minority.  But it feels more imminent for our Tea Party neighbors, and it helps explain how we got to such a divided place.  The only way to bridge the divide is to do what Hochschild did:  intentionally connect with people who disagree with us.

Images of a 1950s school class of white boys in the front of the line (top) and the book by Arlie Russell Hochschild.  I liked this book better than Hillbilly Elegy.

One response to “Cutting in Line Makes Adults Angry Too”