This is the Best Time to Be the Church 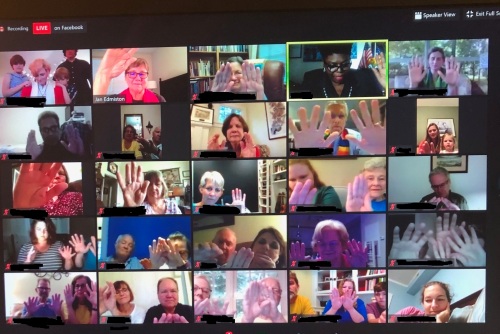 The planes had all been grounded.

Thousands of people had died horrible deaths six days before.  They’d lost their lives on crashed airplanes and in skyscrapers and on sidewalks around those skyscrapers and in the Pentagon on September 11th.  The whole nation was traumatized.

Yesterday, I participated in the ordination for a different pastor named M and because several ordination participants had been exposed to COVID-19, it was a Zoom ordination.  None of us had ever witnessed much less participated in a Zoom ordination.  There was no laying one of hands, no passing the peace with hugs and elbow taps, no tangible feelings of the holiness of the moment we’d been awaiting for so long . . . except that we did lay hands on the candidate.  We did greet each other in peace.  We felt the holiness.

After all the seminary classes and papers and examinations and testing and further examinations and grappling with God, those seeking ordination for professional ministry reach a “can-we-just-do-this-finally?” moment when we are so ready.  And we have dreamed of inviting people important to our journey to participate.  And we have imagined our family and friends present to surround us with love.  And we have wondered who this congregation will be whom we’ve been called to serve.

And then a pandemic happens or terrorism happens or something happens that makes us think, “This is a terrible time to be called to serve” when actually it’s the perfect time.  God calls us when we are needed.

I’ve known new pastors to be ordained the week of a parent’s death.  I’ve been to ordinations days after their spouse has been diagnosed with a terminal illness.

Really, the world needs each of us.  There is so much work to do.

Image of The Laying On of Hands for M’s ordination and installation yesterday.  This post is dedicated to her and to the other M who’s been ordained for almost 19 years.